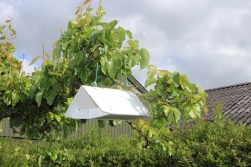 It is estimated that 1/6 of the world’s agricultural production, pre- and post-harvest, is lost due to insects, limiting the quality and quantity of crops available for food. The control of pest populations is achieved mainly by the application of chemical insecticides, but this encounters limitations of efficiency (e.g. development of resistance), environmental issues and public acceptance in a context of food safety and environmental care. Since insect interactions with the biotic environment is in large part driven by odorant molecules that constitute the animal “odorscape”, the olfactory system appears as a target of choice to control insect behaviors.

In this context, we propose to characterize ligands of the ORs of the noctuid moth Spodoptera littoralis, a model species in agronomy for which we have identified a large array of ORs. We propose to set up an innovative automatized high-throughput functional screening approach to identify a vast array of ligand-receptor couples (for the first time in a crop pest). This breakthrough in the field of molecular bases of olfaction in insects outside Diptera will identify ORs involved in key behaviors (reproduction, oviposition, attraction, repellence) to target in the frame of crop pest protection. Ligand-based and receptor-based molecular modeling approaches will be used to design in silico potential agonists/antagonists/blockers (the “bio-olfacticides”). Their effects on the OR responses and in fine the behavior of pest insects will be tested.

The scientific outcomes of this project are to better understand how animal species take advantage of olfaction to deal with their environment and how ORs evolves to gain new functional properties. We will answer the question of which OR/ligand couples are used by an animal species to choose the better strategy to exploit available resources. In the context of fundamental neurobiology, we expect to reveal how narrow/widely tuned the ORs are. We are interested in the following questions:

Also, predictions of relevant 3D insect OR models and ligand binding mechanisms, currently hampered by the lack of tertiary structural information, would be of great interest to a large community.

Apart neurobiology, a better understanding of the molecular mechanisms of olfaction will have also impact in other diverse disciplines such as agricultural research, animal feeding behavior, or artificial noses.